As most historical records indicate, civilization did not begin with the car. Same goes for insurance. Long before the carpool or drive-in, the main principle of insurance — trading the burden of risk for money — was slowly developing into a global phenomenon. 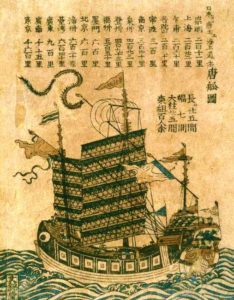 China, 3000 BC: that’s the date on insurance’s birth certificate. The proud parents were Chinese merchants who, tired of losing valuable goods in shipwrecks, proposed what is now recognized as the oldest predecessor to modern insurance. Merchants divided their goods evenly among the ships, meaning that each boat carried a mix of cargo, not just one merchant’s.

Thus, a shipwreck meant a slight loss for all instead of a crippling loss for one — safety in numbers, a time-tested principle that your insurer practices to this day.

Around 1790 BC, the Babylonians took insurance to the next level. As merchants faced the many perils of ship and caravan trade — squalls, pirates, thieves — King Hammurabi, of “an eye for an eye” fame, enacted a new type of insurance to keep business (literally) afloat.

He (or someone he knew) proposed the concept of bottomry, which allowed merchants to finance their shipping through loans from lenders. These loans were paid back, with interest, only after the safe arrival of the goods. But if the merchandise was lost in transit, they didn’t have to pay a dime. Essentially, it was a way for merchants to protect themselves financially for a premium. Sound familiar?

Because the historical record is mostly quiet for, oh, an eon or two, let’s fast-forward to Medieval Europe.

The very first insurance contract was signed in Genoa, Italy, in 1343. Its principles were similar to ancient Babylonian ones — merchants could take out loans guaranteeing safe arrival of shipments — only now the agreement was inked and ironclad. It seems many merchants had discovered the hard way that shouting “liar, liar, pantaloons on fire” failed to guilt cheating lenders.

If you’ve ever wondered why crash-test results matter or why age can determine the price of a life insurance policy, it all dates back to 1600s Europe.

This era brought luminaries like Blaise Pascal and Pierre de Fermat, who first developed laws of probability. And probability is the favorite word of actuaries, who calculate risk based on it. The Renaissance also found Edmund Halley, of comet fame, pioneering the first mortality table, which depressingly but accurately predicted the likelihood of death based on current age.

Insurance, like baseball, is a game of numbers. Thanks to these mathematical advances, early insurers could better calculate risk and customize pricing.

The spark for insurance against natural disasters came when Nicholas Barbon, reacting to the great London fire of 1666, created the first fire insurance company. 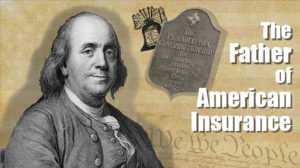 On our side of the pond, Benjamin Franklin helped pioneer the concept of fire insurance through his Philadelphia Contributionship, allegedly stating that “an ounce of prevention is worth a pound of cure.” This was also the guy who said “A penny saved is a penny earned.”

Around 1850, insurance started to help people with accident-related medical expenses. The Franklin Health Assurance Company of Massachusetts (no relation to Ben as far as we know) was the first U.S. company to offer accident insurance, which helped people pay for recovery after steamboat or railroad mishaps.

By the late 1800s, financial and medical protection, legal guarantees, and protection from unknown risks were top priorities — so it makes sense that these went into a recipe for the next big insurance phenomenon.

The haughty and mustachioed (we’re guessing) Gilbert J. Loomis started building his own car in Westfield, Massachusetts, in 1897. Though his wheels were the hottest things to hit the streets, they weren’t exactly equipped with antilock brakes or power steering (nor were anyone’s, for that matter). Thus his joyrides about town, weaving around pedestrians and clunky horse-buggies, rightly struck him as dangerous.

So what did he do to counter all these damage risks? He drove very slowly down to the Travelers Insurance Company (part of the Lyman Agency) and bought the first auto insurance policy to protect it.

crossing the fault line: car insurance in the 20th century

Not long after Loomis, Henry Ford and his assembly line brought car ownership to the masses. But a lot of newbie motorists, unpaved roads, and disorganized traffic made driving dangerous.

In 1930, car accidents killed more than 85 people in the U.S. per day. Given all this bumping around, and confusion over who was causing it, it’s no wonder we needed car insurance more than ever. Enter liability insurance.

Connecticut was the first state to take fault into consideration when handling claims. In 1925, Connecticut drivers who caused at least $100 in accident damages had to pay restitution. This payment was made through the at-fault driver’s liability insurance, bank account (cash), or stocks and bonds.

The at-fault insurance concept further broadened in 1927 when Massachusetts became the first state to require drivers to buy liability coverage.

The evolution of car insurance companies in the 20th century

By the 1940s, driving laws and road maintenance were improving, most states had mandatory liability insurance laws, and automobile manufacturing boomed. More cars and more drivers meant a greater demand for reliable insurance. This opened the competitive floodgates, and some of the best-known car insurers expanded the industry in creative ways.

Here are some of the milestones of the past century:
1934: Car insurance agents make their debuts.
1937: Rates are tailored to match the driver’s age, vehicle, and mileage.
1956: An IBM computer is used to store car insurance data.
1959: Discounts! As motorists’ skills and vehicle safety improved, insurance companies began to reward safe drivers through discounts.
1980: 24/7 claims service via telephone.
1990s: Dot-com days revolutionize the industry.

An independent insurance agency can do important things for you: