Flood risk is growing for US homeowners due to climate change. Current insurance rates greatly underestimate the threat, a new report finds 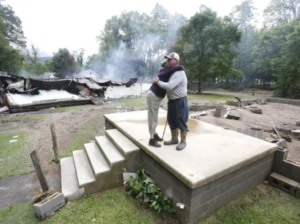 (CNN)Wildfires and hurricane-force winds produce stunning videos and headlines, but flooding is the most common and costly natural disaster in the United States.

And almost no place in the country is immune as 98% of all counties in the US have experienced at least one flooding event. In the last decade alone, floods have caused more than $155 billion worth of damage, according to the Federal Emergency Management Agency (FEMA).
As the climate changes, the risk of financial loss from flooding for millions of homeowners is increasing.
After the snow melts, the flooding will begin. Here’s how to prepare
A new report finds that there is a growing gap between the financial threat homeowners face from flooding and the insurance rates some pay to cover that risk.
Currently, there are nearly 4.3 million residential properties around the country with a substantial risk of financial loss due to flooding. The report defines “substantial risk” as carrying a 1% chance of flooding in any year.
Some, but not all, of those homeowners have insurance through the federal government’s National Flood Insurance Program (NFIP), which provides more than 90% of the flood insurance policies in the US.
But the report finds that those homes face losses each year which dwarf the costs of their NFIP premiums. The average NFIP premium cost today for those properties is around $981, but their expected annual losses are $4,694 per property.
If all of those property owners were to purchase flood insurance to protect against potential damage, premiums would need to increase by 4.5 times to cover the risk.
The analysis was conducted by the First Street Foundation, a non-profit research, and technology group that aims to shed light on the growing risk of flooding around the country due to climate change.
The study only considered residential properties with between one and four units, but the authors say the actual financial risk from flooding around the country is likely far greater than the report captures.
Millions more US homes are at risk of flooding than previously known, new analysis shows
“Our numbers are large … but it’s not encompassing all properties that are inside the Special Flood Hazard Area, or many other residential properties like condos, apartment buildings and other larger buildings,” said Matthew Eby, founder and executive director of the First Street Foundation. “So if you take that and you extrapolate, there are actually a lot more buildings that have financial risk as well.”
A separate report from the foundation last year estimated that there are a total of 14.6 million properties around the country with substantial flood risk. The owners of around 5.9 million of those properties may be unaware of their flood risk because they are located outside of FEMA’s Special Flood Hazard Areas (SFHA), and therefore aren’t required to buy flood insurance even if they hold a government-backed mortgage loan, the report found.
Scientists are confident that climate change is fueling hurricanes capable of whipping up more dangerous storm surges, as well as increasing the odds of extreme rainfall events that can trigger inland flooding.
Today, the 4.3 million homes with a 1% chance of flooding carry an expected annual loss of $20.8 billion due to flood damage, the foundation’s analysis found.
However, within the life of a 30-year mortgage signed today, those losses are projected to balloon by 61% to nearly $32.2 billion per year by 2050 due to the effects of climate change.
As massive storms like Hurricanes Katrina, Harvey and Sandy have hammered some of the country’s biggest coastal cities, the NFIP’s bottom line has already taken a beating.
Chief among those is the process of drawing FEMA’s flood maps, which provide the basis for setting insurance rates for many policies under the NFIP.
FEMA still has not completed flood maps for huge swaths of the US, said Michael Grimm, the acting deputy associate administrator of the Federal Insurance and Mitigation Administration, while testifying before a House committee in February 2020
And though FEMA maps are required by Congress to be reassessed every five years, Grimm says it takes seven years on average to complete a new flood map, meaning that some maps may technically be out of date by the time they’re finished.

Insurance rate-setting under the NFIP has seen little change since the 1970s.

The rates are set depending on which of three broad types of flood zones a property sits in: low to moderate risk, high risk, or high-risk coastal area. The type of property, the elevation of the building, the number of floors, and whether it has a basement are also factored in.
But experts say the use of these flood zones is an unsophisticated way to gauge the risk that doesn’t take into account key considerations, like the topography of the land where a property sits. FEMA’s flood models only factor in the risk of storm surge and river flooding, not the threat posed by heavy rainfall.
“It’s actually sort of a crude way to price flood risk because it doesn’t account for changing flood risk across a landscape,” said Carolyn Kousky, the executive director of the Wharton Risk Center at the University of Pennsylvania and a member of the advisory board for the First Street Foundation.
To address these problems, FEMA is expected to roll out a new system for setting flood insurance rates later this year called Risk Rating 2.0, which the agency says will utilize the latest technology to better capture the risk for each individual property.
David Maurstad, the senior executive of the National Flood Insurance Program, said that the First Street Foundation’s findings should not be taken as a preview of the rate changes flood insurance policyholders can expect when Risk Rating 2.0 goes into effect.
“Any attempt to compare an outside entity’s premium estimates or premium recommendations to the Risk Rating 2.0 initiative is premature,” Maurstad said in an emailed statement. “FEMA is constantly working to leverage new technologies and provide national-scale flood risk information more efficiently, accurately, and consistently to the public.”
Still, Kousky says that the new findings are an important indicator of just how much the cost of flood damage could grow around the country as the climate changes, which the cost of insurance in any single year does not capture.
“It certainly has shown how much flood losses are going to start increasing as a result of climate change,” she said. “That should be a red flag for the NFIP and communities everywhere that the cost of this risk are going up. And that means to stay solvent, insurance costs have to go up as well.”